So, things are progressing fairly well with the Lexus V8 conversion. I thought it about time to start posting up some of the progress pics etc.

Bit of back ground. I recently acquired a 2001 SWB DiD with a sickly motor. The idea was to repair the motor and use the car as a diesel for day to day town driving etc. The car has done a high mileage, but is in good all round condition having spend lots of it's life commuting between JHB and the Cape.

Here's the object of our current ministrations ... 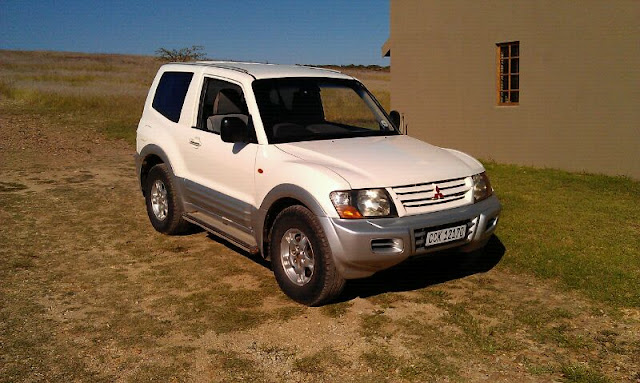 Once we had stripped the DiD motor and discovered the cracked piston we did the maths on repairing vs replacing and replacing came out strongly on top. I was slightly glad actually as I always thought the Gen3 SWB would make an awesome toy if fitted with a nice grunty V8.

Thus, we started on the V8 conversion. The shorty is a manual which makes things a bit easier, but did require a flywheel and adaptor plate to be made up. We CAD'ed up all the bits and pieces and sent them off to the engineering folks. 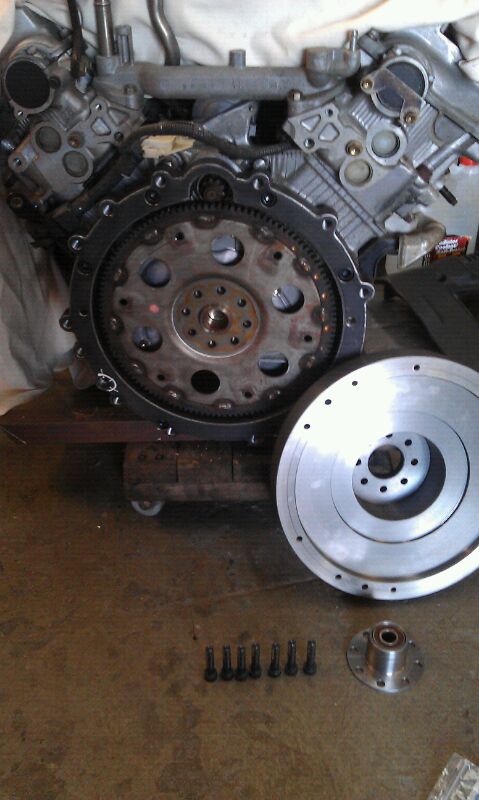 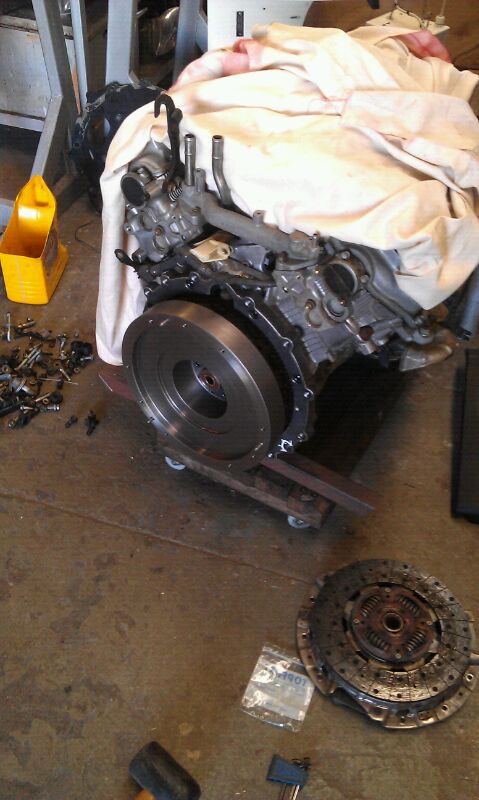 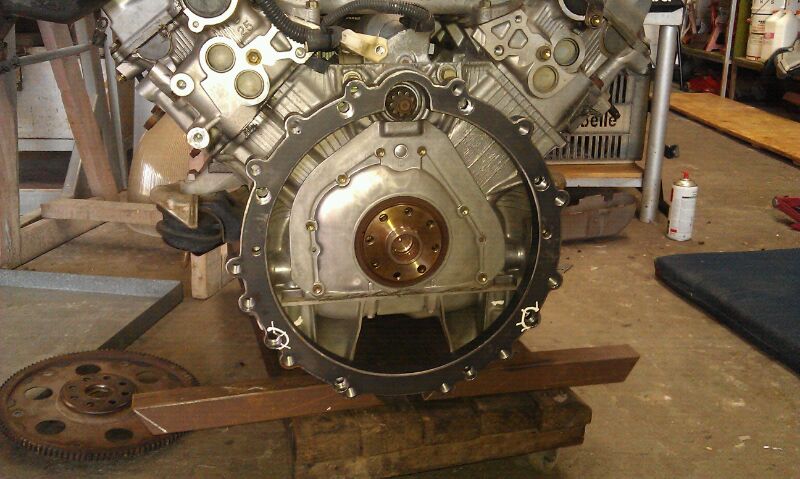 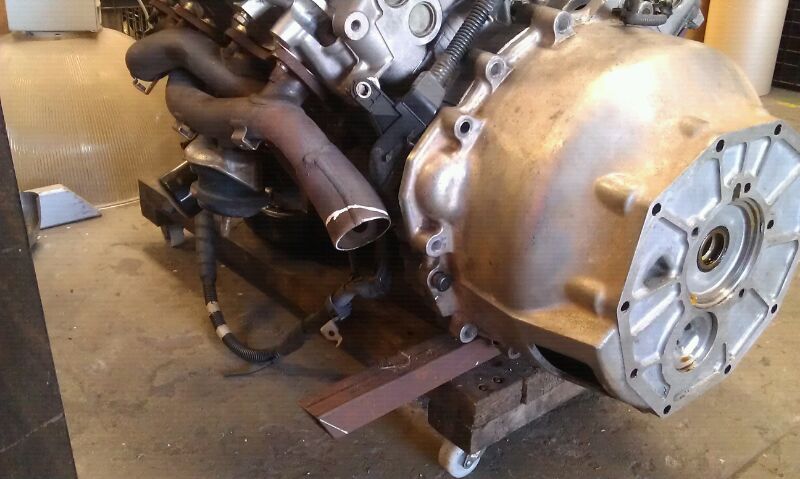 It was then time to do a test fit to see if any other issues arose. We fitted the engine into the bay without the sump (it definitely fouls the front axle) and any ancillaries. We then built the front of the engine up with the PS pump, air con and alternator. We opted to make use of the Lexus ancillaries. The idea it to keep all the Lexus stuff Lexus and the Paj stuff Mitsubishi where possible. 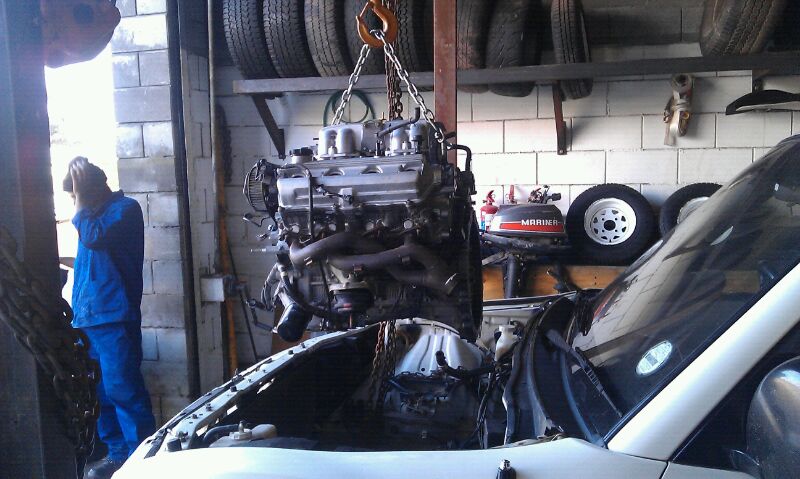 Things fit amazingly well. The drivers side header misses the steering column. All the ancillaries fit with no mods at all. The connections for the air con pump are even the same as the Lexus ones (although the one pipe is too short).

The only major item that fouled things was the oil filter so we are going to remote mount that which was the plan all along anyway. 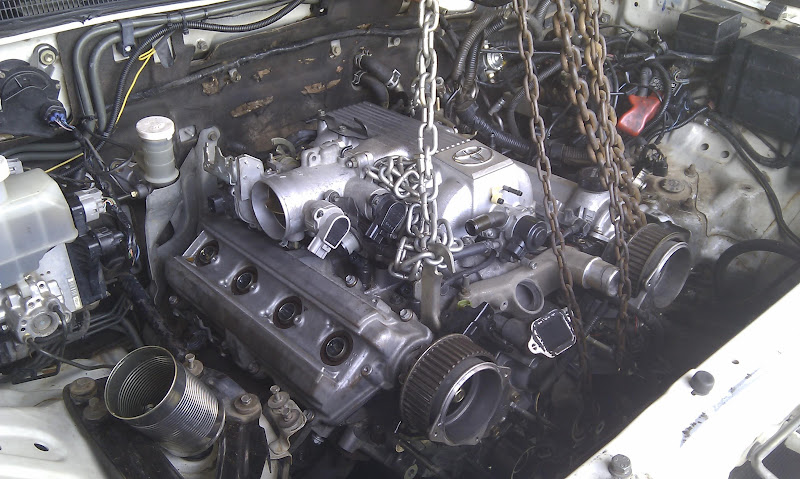 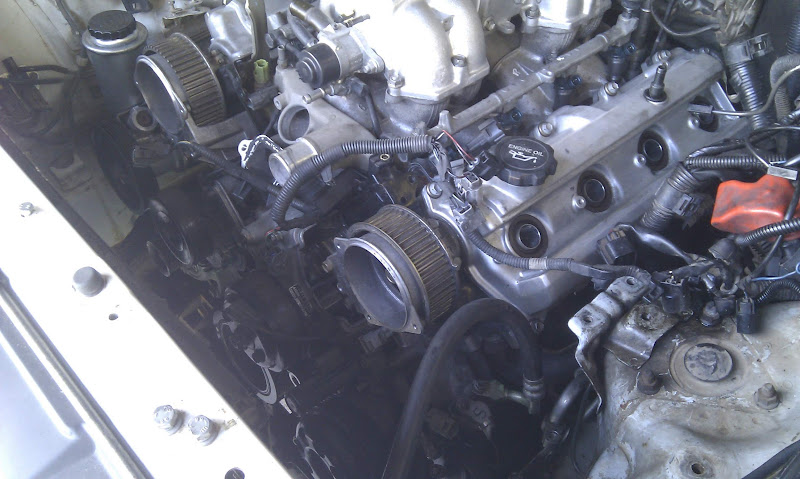 We are now waiting for our rear bowl sump to arrive so that we can fabricate the engine mounts. The mounts line up to within 5mm!

Next up are the electrics, fuel system and rest of the thousand and one little jobs.

you guys make me itch with all the the Lexus coversions here now?
Nice Job though and good luck
''Life Can Be Good - It Can Be Exceptional Too ' !!!
Top

Right, a couple of progress pics. Things have been rather hectic at work so apologies for the lack of updates.

Car is almost done, we are hoping to be running by next weekend. The focus over the last couple of weeks has been the engine mounts, exhaust and finishing up the flywheel/clutch etc.

So far the flywheel is complete, balanced and installed. The clutch is installed and the sump is on. All the pipes have been competed for aircon and power steering. This week saw the engine mounts being completed and the exhaust being finished up. We have managed to use the original diesel engine rubbers with a small adapter plate thereby keeping to our matra of not changing too much. 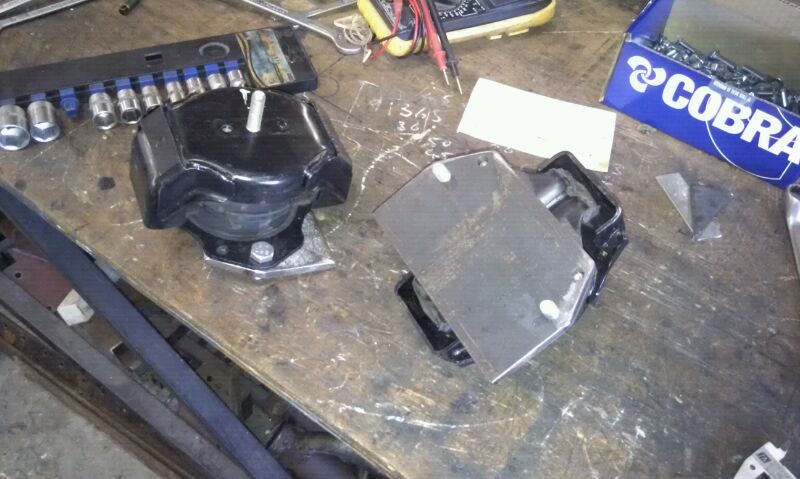 The engine is now bolted up and fully installed.

The other job completed was the new exhaust section. We are using the stock headers and the standard Pajero exhaust so just have to make a section that brings the two header pipes from the engine to the existing exhaust. 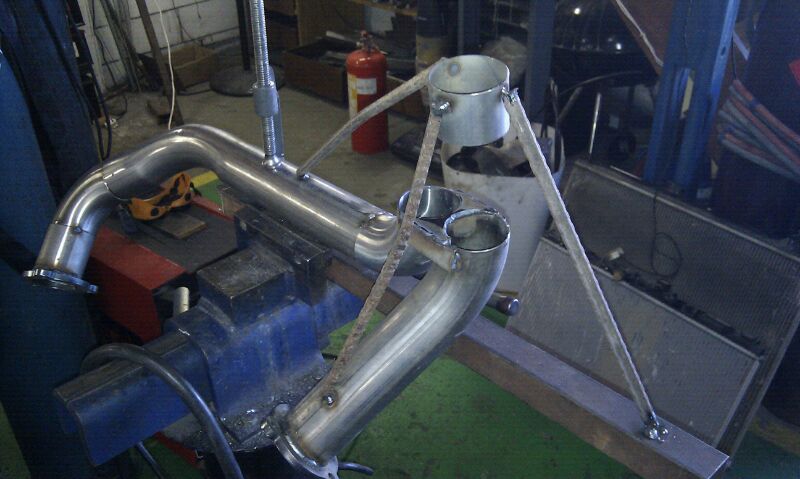 And the finished product ready to be installed. 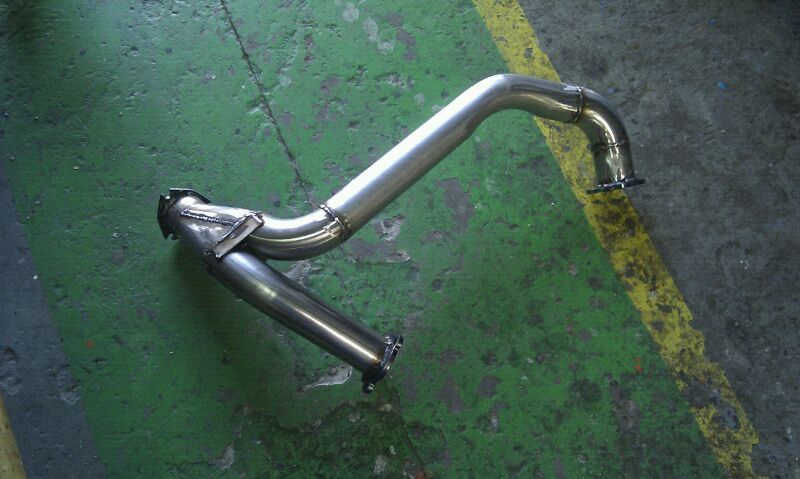 The rest of this week is to focus on the electrics and joining up radiator pipes.

Just a quick update on the Lex conversion to our SWB.

The conversion was completed a good couple of weeks back and we have been using the car as a daily driver for most of the time since then. A couple of little issues have needed sorting out, the main one of which was fixing all the leaks on the "professional" sump we got from JHB. Next time we will make our own!

Anyway, it has turned out quite well. 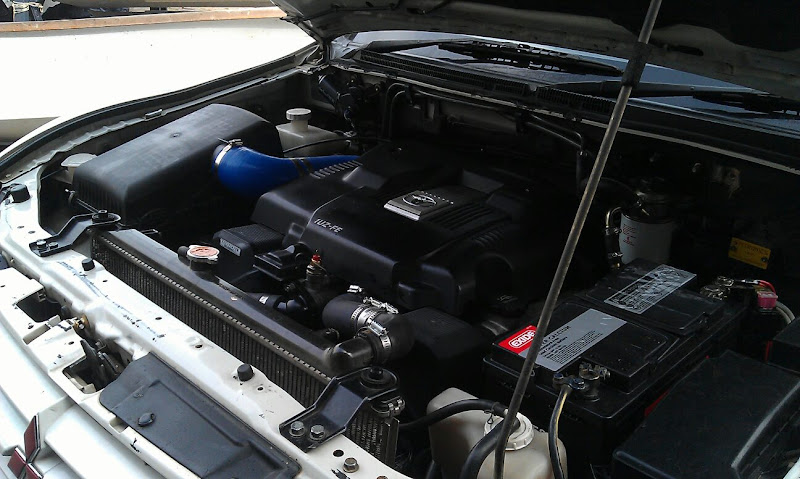 In the end we had to have the exhaust system replaced as the old diesel system was just too restrictive. Initial dyno runs produced 150kw and 280Nm, quite a bit below what we expected. After the exhaust we now get 167kw and 335Nm which is a bit more inline with expectations.

So, a few observations.

1) The Lexus motor is quite a decent match for the diesel gearbox. It's no boy racer, but has good urge in the first three gears. It can do 140km/h in third! Fifth allows one to cruise at 120km/h doing 2600rpm.

2) Using a slightly older diesel car helps with the electrics. Things are a little simpler when it comes to getting rev counters etc to work. We managed to intercept the wires to the dash cluster and got the stock rev counter, temp gauge, charge and oil lights to work. The ABS system is also totally stand alone on the diesel car which is great as that all still works as intended.

3) Leave the old ECU in place as it drives lots of other systems, notably the immobiliser. You will need to remove the Engine Check light bulb as it will obviously be on for good now.

4) The diesel is a fly by wire throttle system so you need to convert it to cable throttle. This is not too difficult, but do not remove the throttle pot as the 4x4 ecu uses it for some reason and you will get the flashing orange light of death without it.

5) The stock radiator seems to be able to handle the cooling duties just fine. We fitted two large electric fans which have yet to come on. Granted, it has not exactly been very warm, but so far things look good.

6) The aircon is the biggest challenge and currently still does not work in climate control mode. It's quite a complex system and even though there is a A/C ecu it does not physically control the compressor. This is done by the engine ecu which combines a number of inputs to decide if the compressor should come on or not. Needless to say, having an engine is an important one so it is never going to switch the compressor on. I thought I had isolated the A/C ecu signal line that told the engine ecu to start the pump, but for some odd reason using this to to trigger the compressor relay has some odd results. For instance, dialling in a cold temp on the aircon (16 deg) causes the pump to switch off! Dialling back again to around 18 deg causes the pump to come on again (outside temp of around 23deg). Anyway, it works fine in totally manual mode for now until I can figure the ecu out. If anyone knows how the Paj A/C ecu works, please let me know.

7) Fuel consumption is currently sitting around 15 to 16l/100km which is not too bad all things considered.

8) ..and yes, it cost more than budget as these things always do, but it's hard to stop when you get going

There you have it. I'll post a couple of followups as things bed down and we get some serious miles under the belt.
Last edited by andref on Tue Jul 04, 2017 10:52 am, edited 1 time in total.
Top

Hi Andref
I picket up my lexus today. Please advise me on where to get a adaptor plate for the manual gearbox to the lexus.
Regards
Top

Were are you based? The guys that did my conversion made up the adaptor. They have all the CAD drawing for it so would likely make another one. However, if you are not in CT then I would suggest a decent engineering works near you. The guys have to make both the adaptor and the flywheel and these two items need to match from a measurement point of view. Its better if you get one bunch to make the whole lot. Any half decent engineering works should be able to do this.

Hi Andre
I live in jhb and thanx I did found some answers today and will keep you posted.
Thank you for your reply
Top

Hi André
I had a Lexus transplant done on my Prado 90 earlier this year. I would like some pics that shows the engine as fitted, to compare with what I ended up with.
Top
Post Reply
24 posts